Exploring The Queen and her Corgis trail 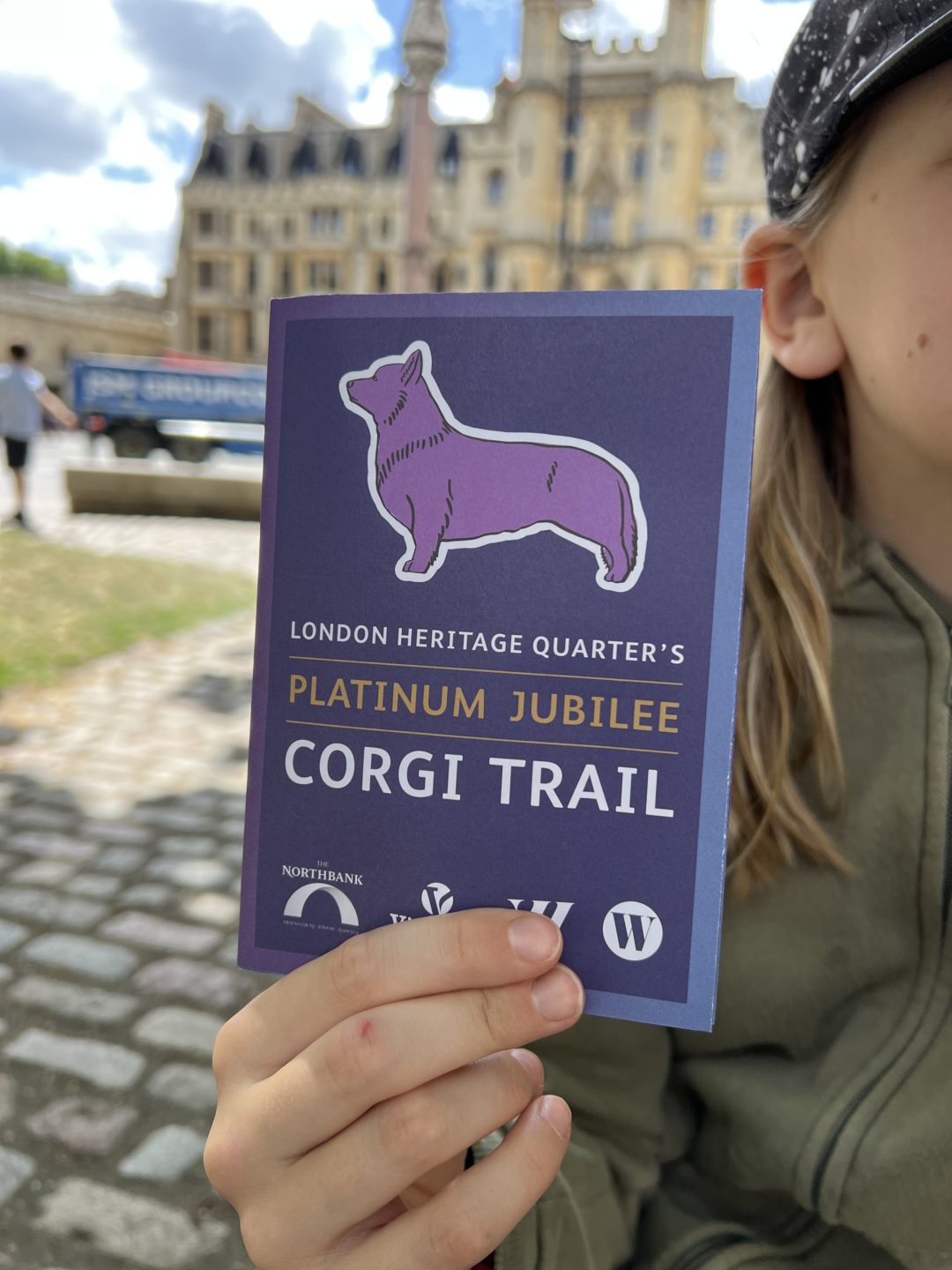 Yesterday we went into London to explore The Queen and her Corgi’s trail. The trail was set up to mark the Queen’s Platinum Jubilee, celebrating the Queen’s closest companions, her fleet of corgis. The trail runs throughout the London Heritage Quarter,  from Victoria Station to Westminster and the Northbank.

Exploring The Queen and her Corgis trail

Did you know that Queen Elizabeth owned her first corgi when she was just seven, it was called Dookie. During her reign she has owned over 3o corgis, all of them Pembroke Welsh Corgis. She has also owned cocker spaniels and the dachshund cross breeds ‘dorgis’.

Different contemporary London artists have decorated each of the 19 statues. We hadn’t heard of any of the artists but they include Aga Skiba, Hannah Sykes and Rebecca Hardaker. The Corgi Trail hosts a mixture of medium and large corgis each measuring between 1.35m and 1.5m in width. Named after the Queen’s own dogs, you can expect names such as Dookie, Muick, Holly, Sugar, and even Whisky.

We downloaded a map before we went but you can also pick up free copies of the London Heritage Quarter’s Platinum Jubilee Corgi Trial leaflets. The first corgi we discovered was no. 14 Jane at the QEII Centre Green. The location was fab, just opposite Westminster Abbey. 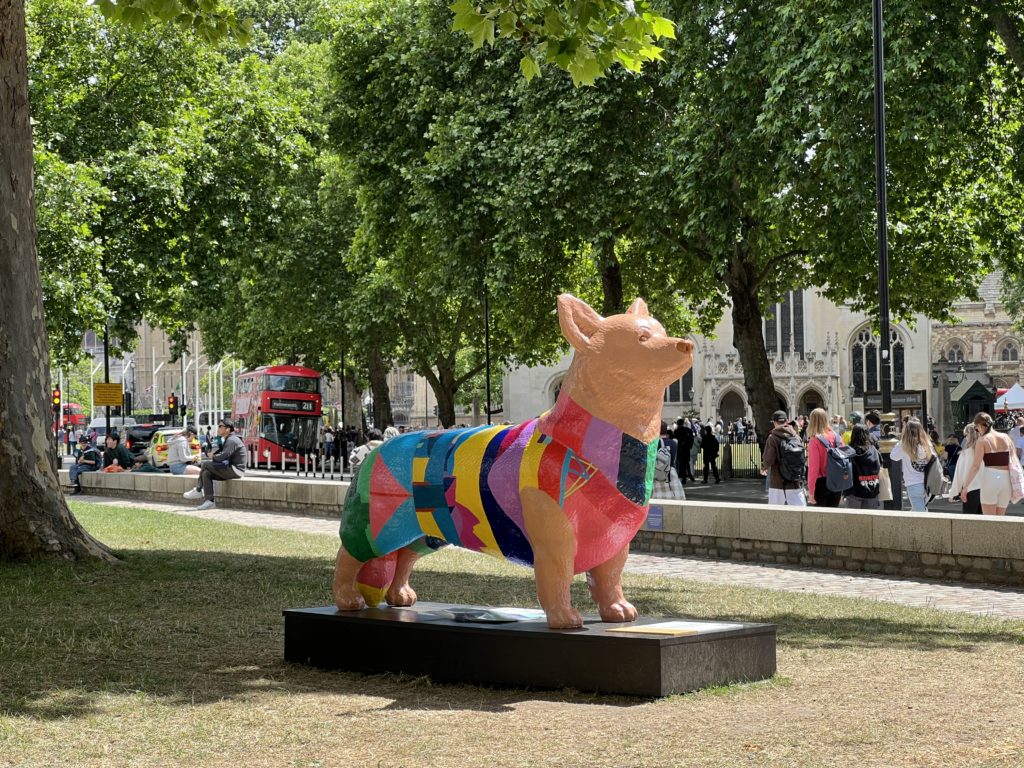 The Corgis were quite close together so it was a quick walk to find no. 13 Whisky in the foyer of Conrad London St James. 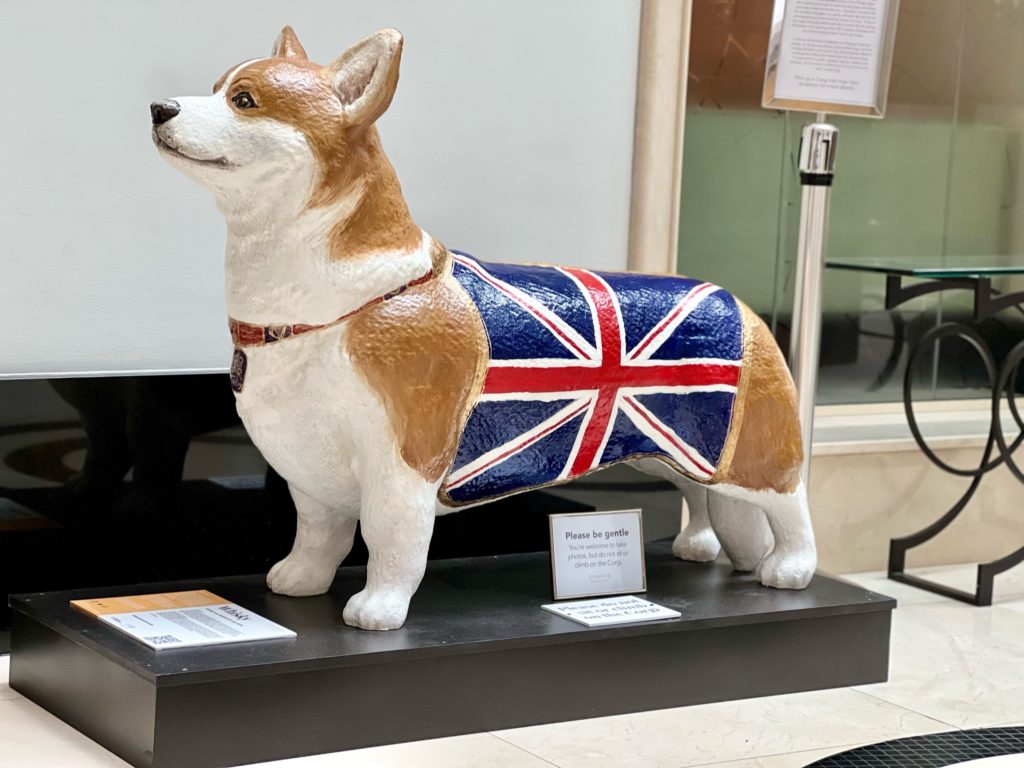 No. 12 Sherry was at St Ermin’s Hotel 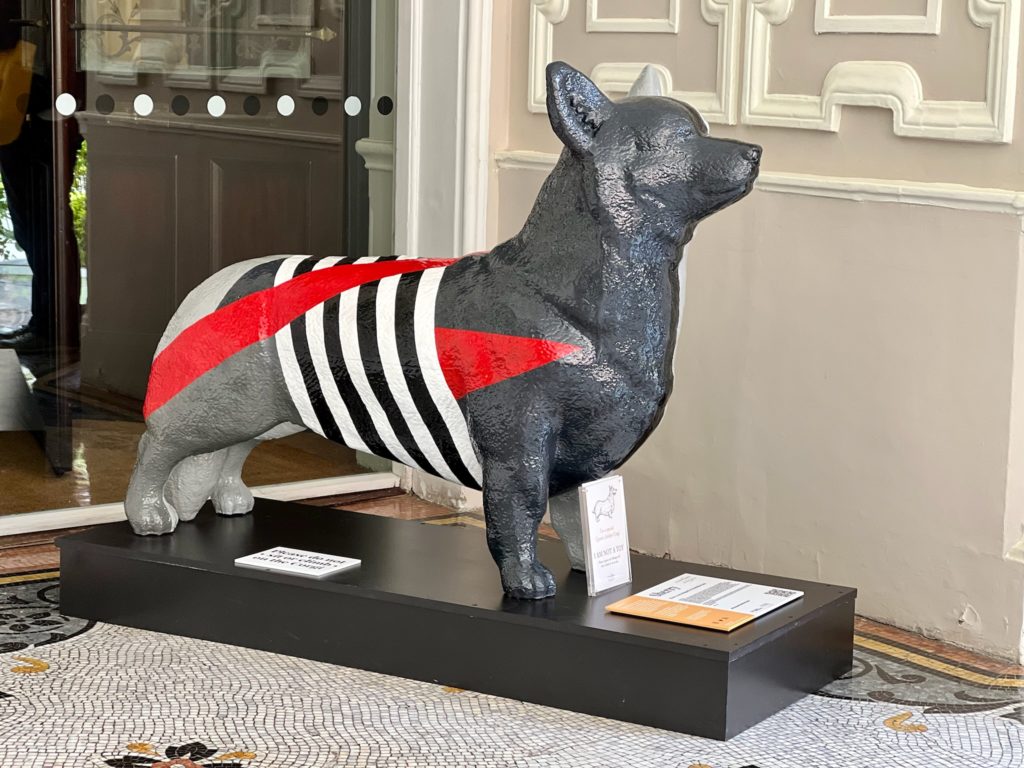 No. 11 Tiny at Christchurch Gardens 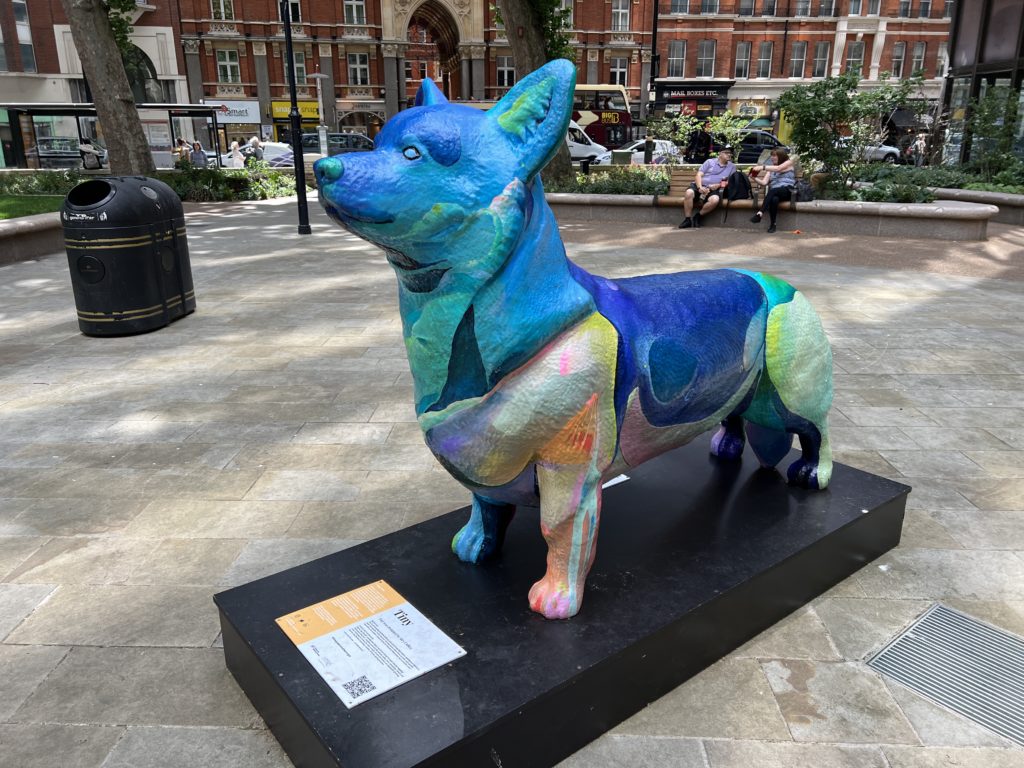 No. 10 Carol at Buckingham Green 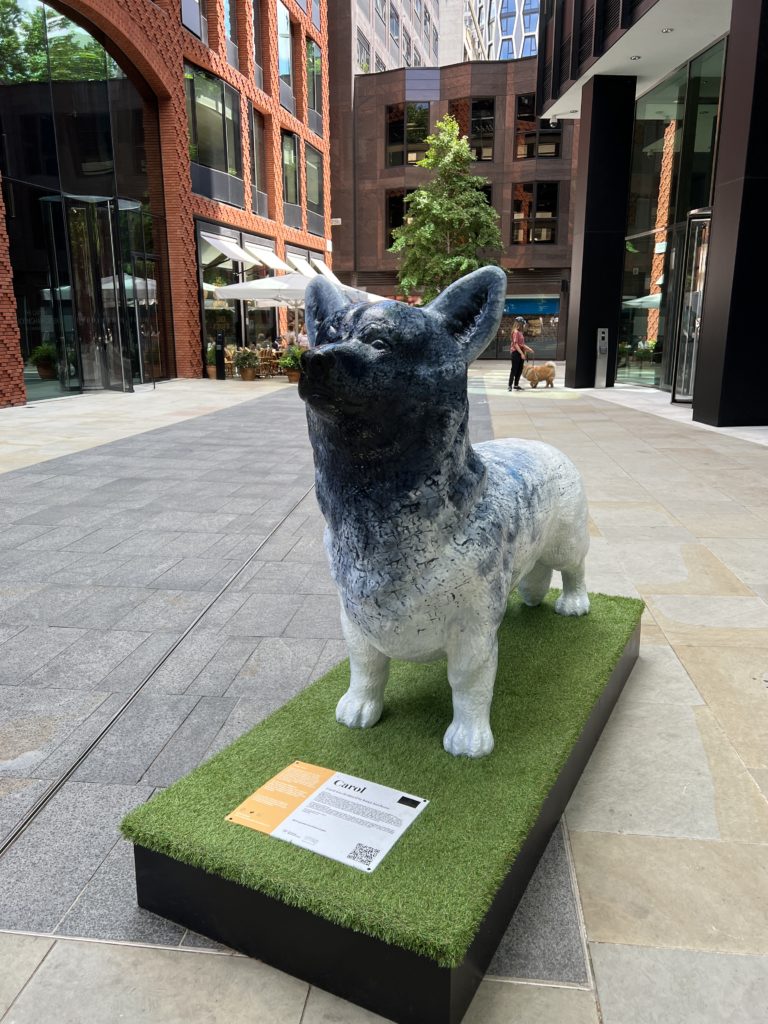 No. 4 Heather at Lower Grosvenor Gardens 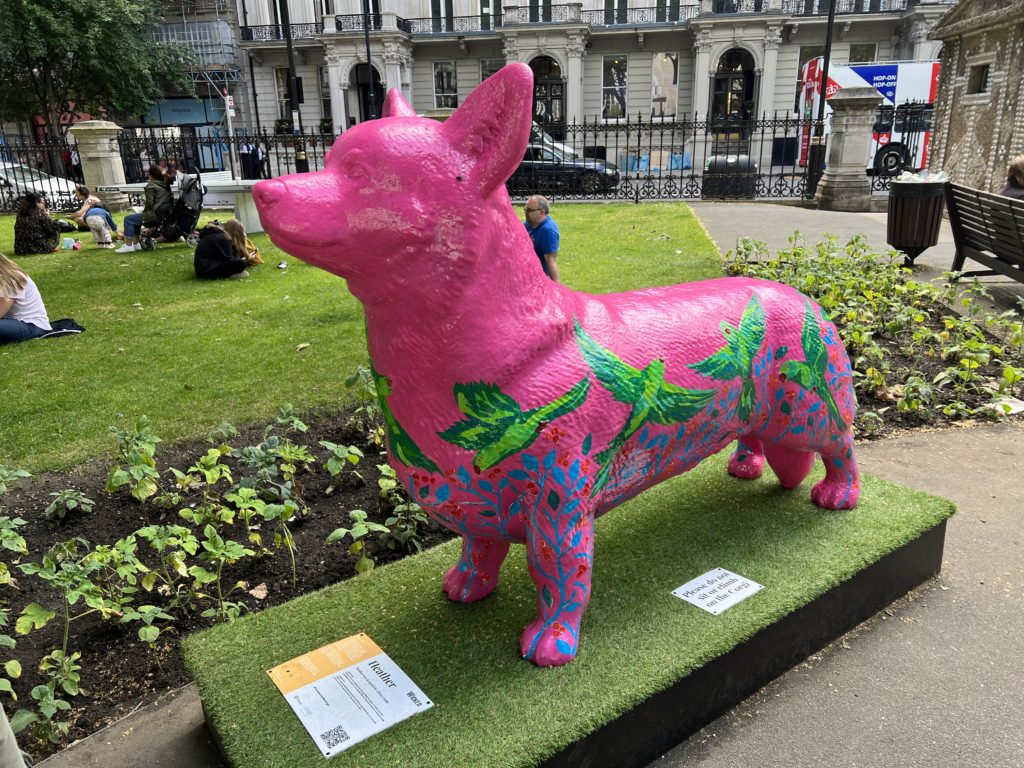 No. 3 Dookie at Victoria Station. 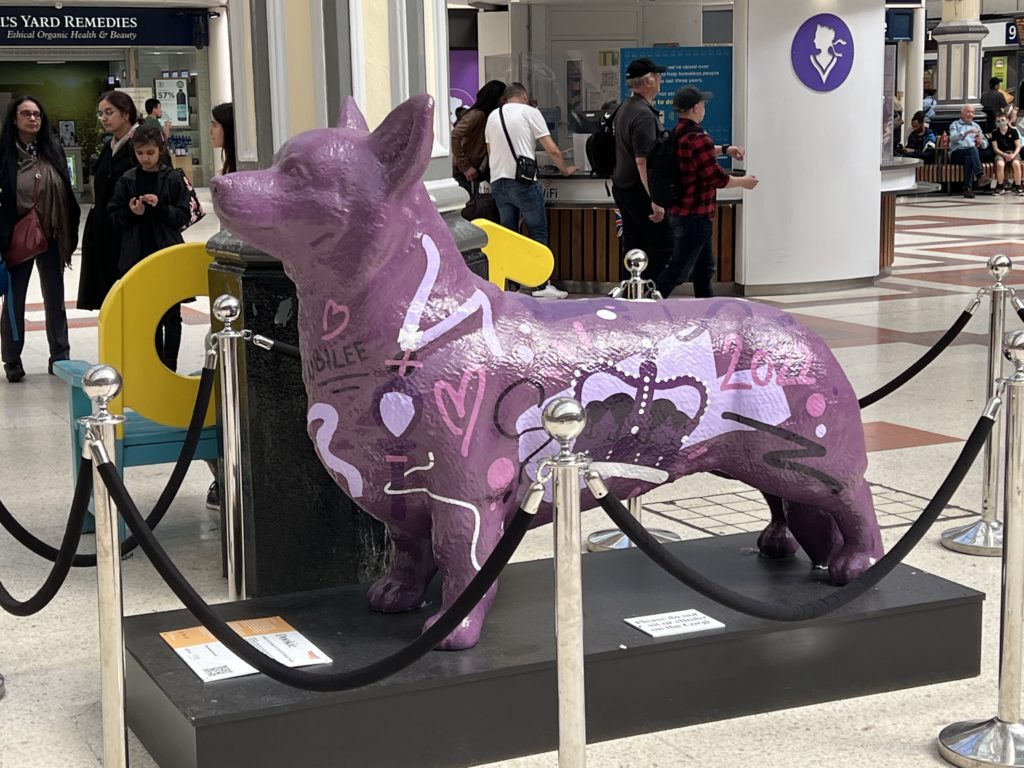 We had a fun afternoon exploring The Queen and her Corgis trail. The Corgis are available to find until the end of July when they’ll be auctioned off for charity.

You may be interested in these other posts about public art in London:

Scenes in the Square, Leicester Square