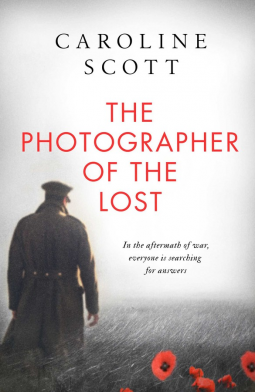 Today seems like the perfect day to share my latest book recommendation with you. It is Remembrance Sunday here in the UK and today I have been thinking a lot about the Great Uncle I lost in the First World War. His name was Alfred Young, he was only 21 when he died and he has no known grave. Last week I finished reading The Photographer of the Lost by Caroline Scott which is my favourite book of the year, it was both heart breaking and poignant.

Until she knows her husband’s fate, she cannot decide her own…

1921. Families are desperately trying to piece together the fragments of their broken lives. While many survivors of the Great War have been reunited with their loved ones, Edie’s husband Francis has not come home. He is considered ‘missing in action’, but when Edie receives a mysterious photograph taken by Francis in the post, hope flares. And so she beings to search.

Harry, Francis’s brother, fought alongside him. He too longs for Francis to be alive, so they can forgive each other for the last things they ever said. Both brothers shared a love of photography and it is that which brings Harry back to the Western Front. Hired by grieving families to photograph gravesites, as he travels through battle-scarred France gathering news for British wives and mothers, Harry also searches for evidence of his brother.

And as Harry and Edie’s paths converge, they get closer to a startling truth.

As soon as I read the blurb for this book I knew I had to read it. I love an historical novel but I don’t think I’ve ever read a book set in the aftermath of the First World War before. The story is told from both Harry and Edie’s perspectives, and also re-visits the time leading up to Francis’s disappearance and Harry and Edie’s search to find out what happened.

This is an epic debut novel of forbidden love, loss, and the shattered hearts left behind in the wake of the First World War. I admit to having tears in my eyes as I read this book. I’ve visited some of the First World War Commonwealth War Graves cemeteries and they are incredibly moving places. I enjoyed reading about all the work in the aftermath of the war, how the bodies of the dead were located and all the work done to create these lasting memorials to both the dead and the missing.

The Photographer of the Lost tells the story of the thousands of soldiers who were lost amid the chaos and ruins, and the even greater number of men and women desperate to find them again. It’s such a beautiful book, I really couldn’t put it down, and the ending is a complete page turner.

The Photographer of the Lost by Caroline Scott, is published by Simon and Schuster UK. Thank you to NetGalley for giving me the opportunity to read this book.