Superbloom at the Tower of London 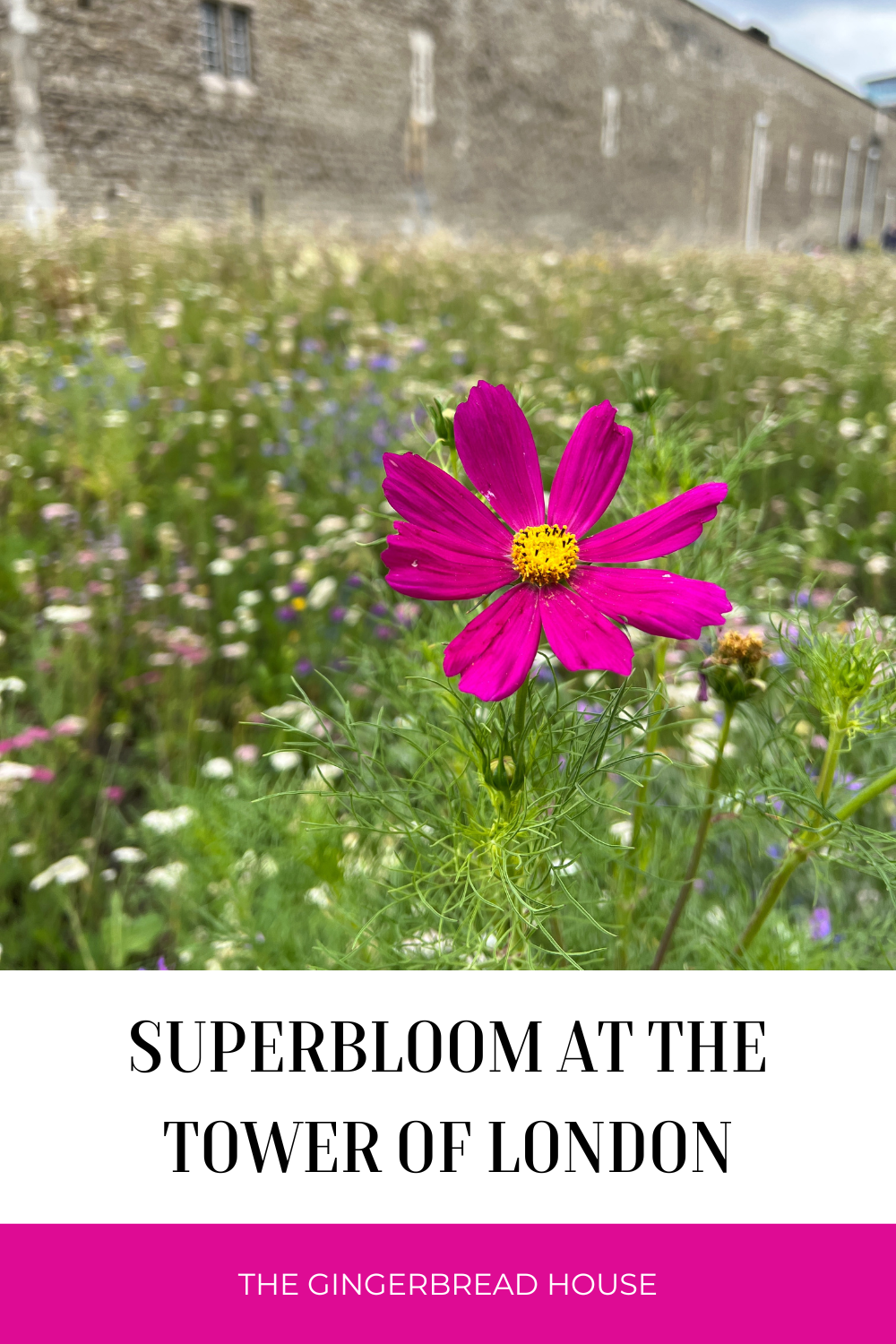 It’s been a while since our last visit to the Tower of London. However, when I heard that over 20 million seeds from 29 flower species have been planted in the moat around the Tower of London to celebrate the Platinum Jubilee of  The Queen, I knew we had to visit. Luckily Little Sis heard all about the huge slide going down into the moat, and wanted to come too.

Superbloom at the Tower of London

I booked our tickets online and we hopped on the underground into London. You can actually walk around the outside of the Tower of London and see the wild flowers for free, but you get a much better experience if you walk through the moat! 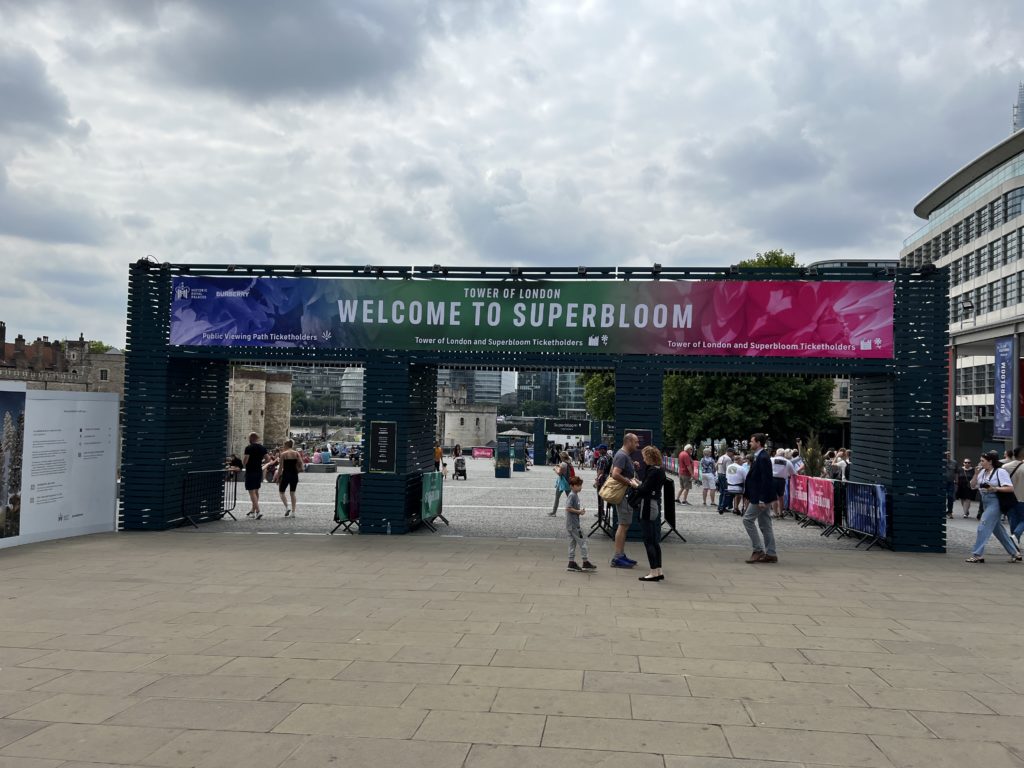 We loved walking through the gateway into the Tower of London  where we were greeted by the first installation. Towards the Thames were several emblems on poles, standing out amongst the wild flowers. There were all kinds of flowers, as well as a plum tree, and you could see birds and hear insects all around. 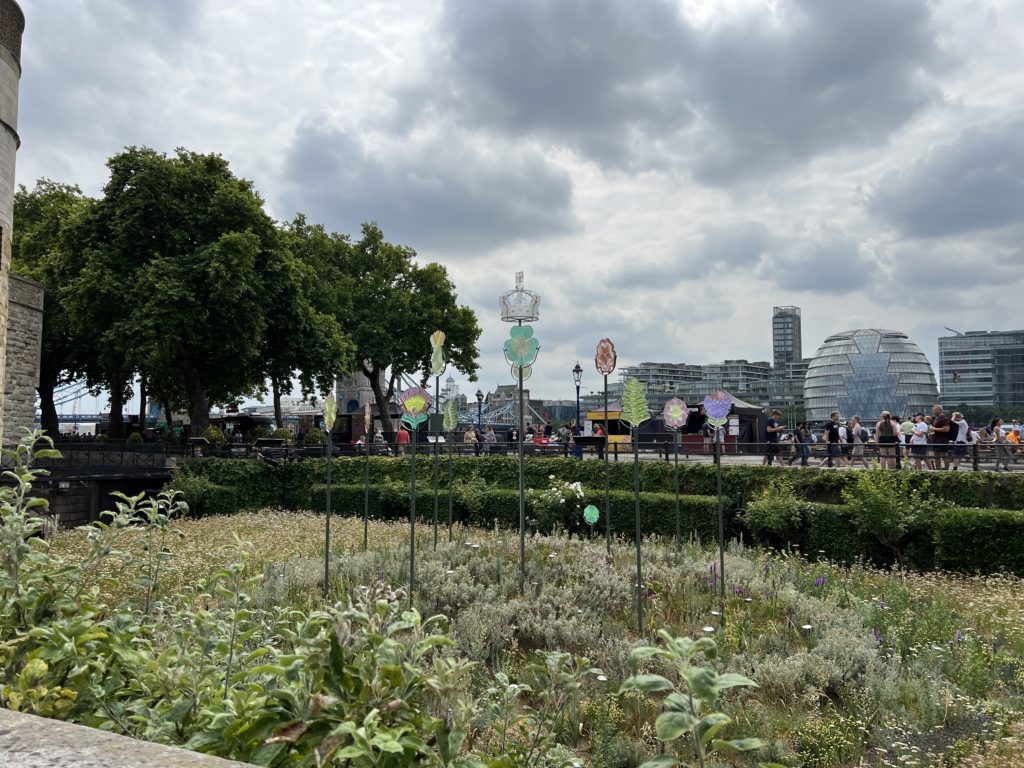 We turned 180 degrees and headed down towards the moat. We picked up a leaflet but there were also plenty of information signs to stop and read along the way.

Over 20 million seeds from 29 flower species have been planted in the moat. The planting commemorates the Platinum Jubilee of the Queen but is part of a larger, permanent transformation of the moat into a new, more natural landscape.

Little Sis soon spotted the slide and ran over so she could have a go. You could grab a hessian sack, climb the stairs and go down the slide as many times as you wanted. She absolutely loved it! 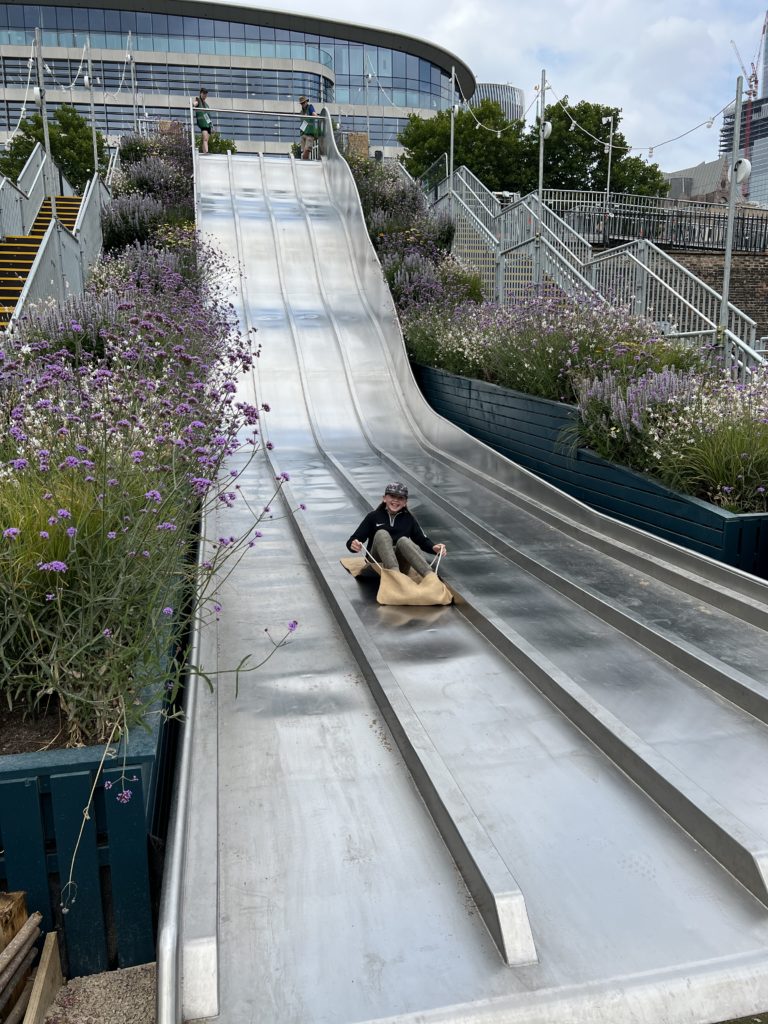 Although the weather was slightly overcast it was really warm and the flowers were in full bloom. We loved how the moat had been transformed into a flower meadow. It evolves through the summer in a bid to create a biodiverse wildlife haven in the middle of the city. We had read a few reviews which said the flowers weren’t fully out, so we were delighted to see them after the recent heatwave. Thankfully the night before our visit it had rained a lot and the flowers had benefitted from it. 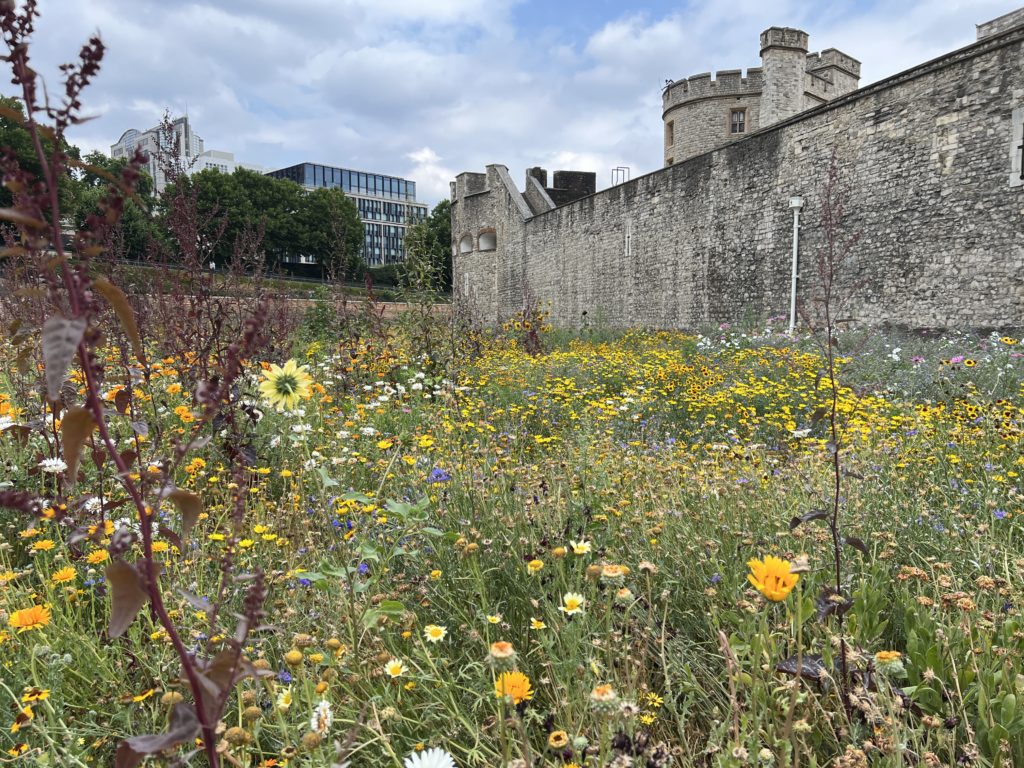 There were plenty of places to sit and admire the flowers. The walk-through experience took around 30-40 minutes and we followed the one-way system. There were even places to stop and fill up our bottle which we really appreciated! 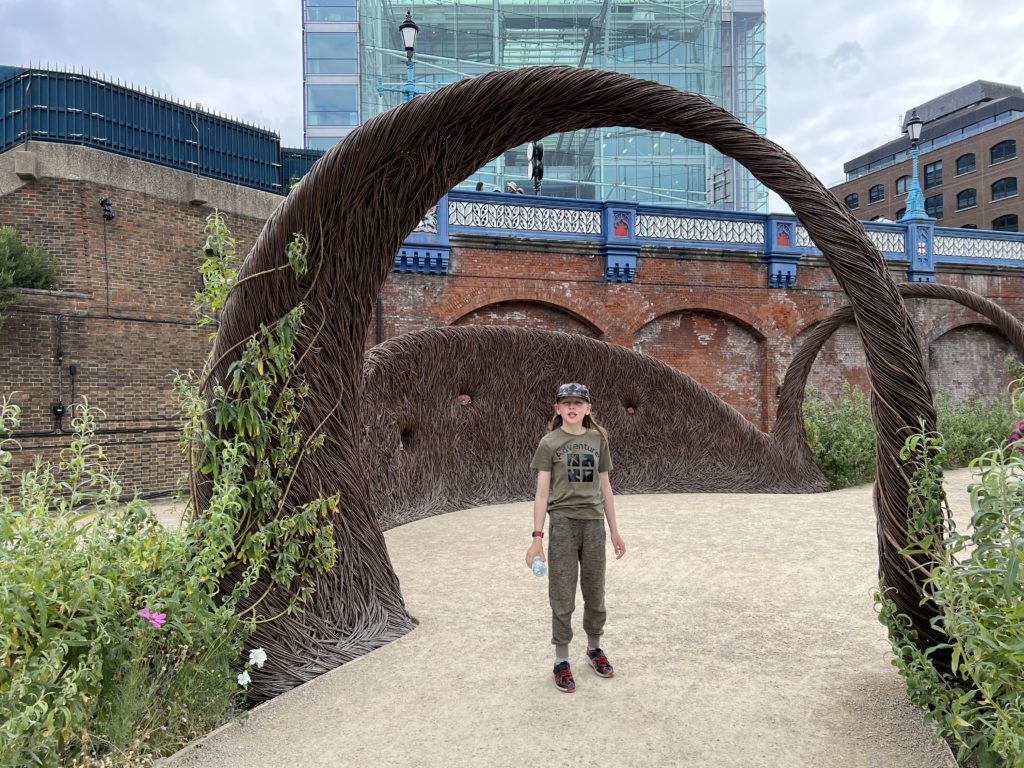 We loved the willow sculpture and the final section of the moat, which was seeds for pollinators! There were some lovely sunflower and the flowers were much taller in this section. They were absolutely full of wildlife although there were some sculptures of insects too. 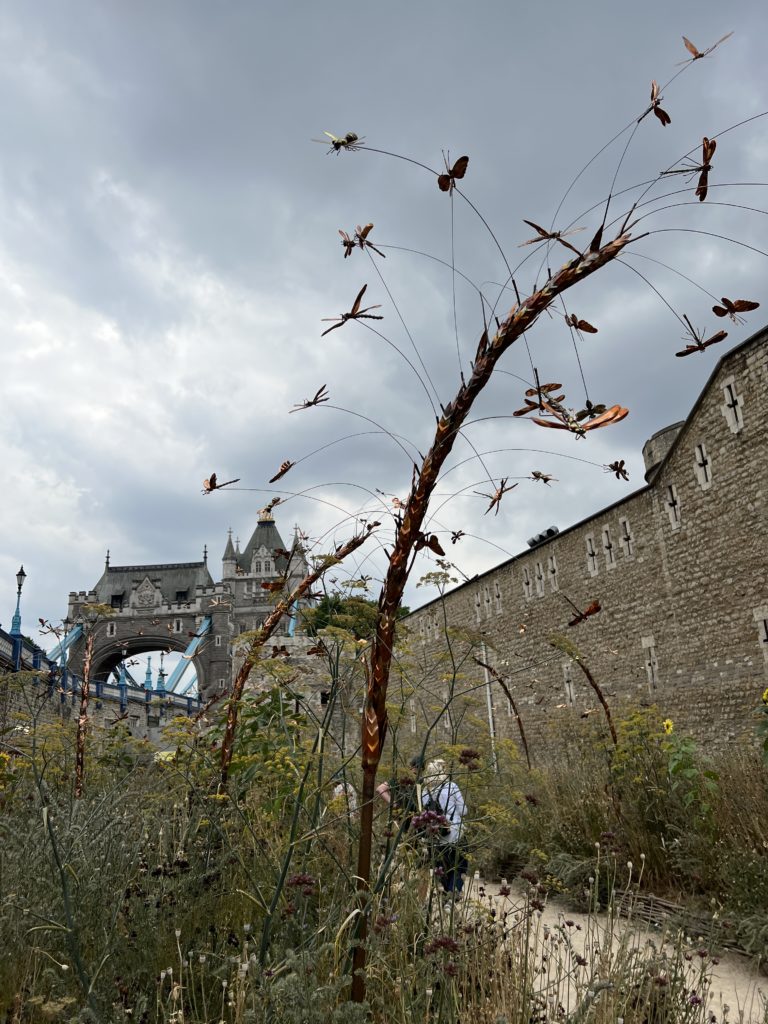