Half-term fun at the Tower of London

I never thought that we’d be affected by half-term with a pre-schooler but all our normal activities stop! This time we tried to be a bit more ingenious and made the most of activities at our local library, autumnal walks in the park as well as a trip to the Tower of London.

Half-term fun at the Tower of London

We’ve been meaning to go to the Tower of London for ages. It’s one of those iconic places which would be in my fantasy London Guide which represent London, along with Big Ben, black cabs and red telephone boxes. Despite being a Londoner my husband had never been so off we all went.

Perhaps it wasn’t our best idea, me being 35 weeks pregnant and a medieval castle which wasn’t exactly buggy friendly but we managed to see the Crown Jewels (via a travelator complete with royal cypher at either end), the famous black ravens and have a picture taken with one of the beefy Beefeaters.

I’d forgotten quite how big the Tower of London was and how much there was to see and do. Edward was brilliant and walked round much of it. Definitely one of our recommended places for friends who visit London at any time of the year. We enjoyed a tasty lunch too in one of the cafes and watched a First World War re-enactment group who had set up camp beneath the White Tower. A great place to see where so many important events happened and soak up some history! 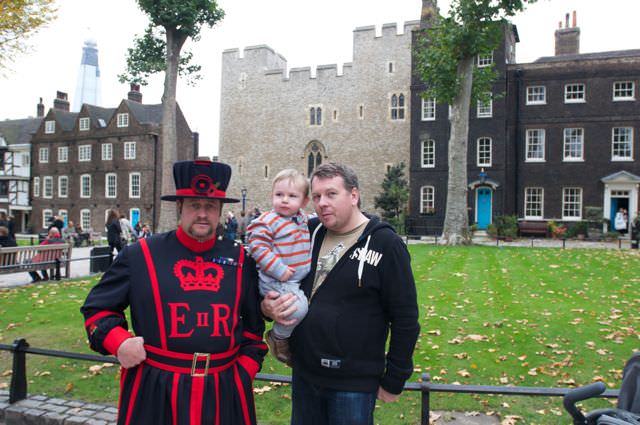 Disclosure: a ticket to the Tower of London was provided by Superbreak.com