Making our own natural dyes 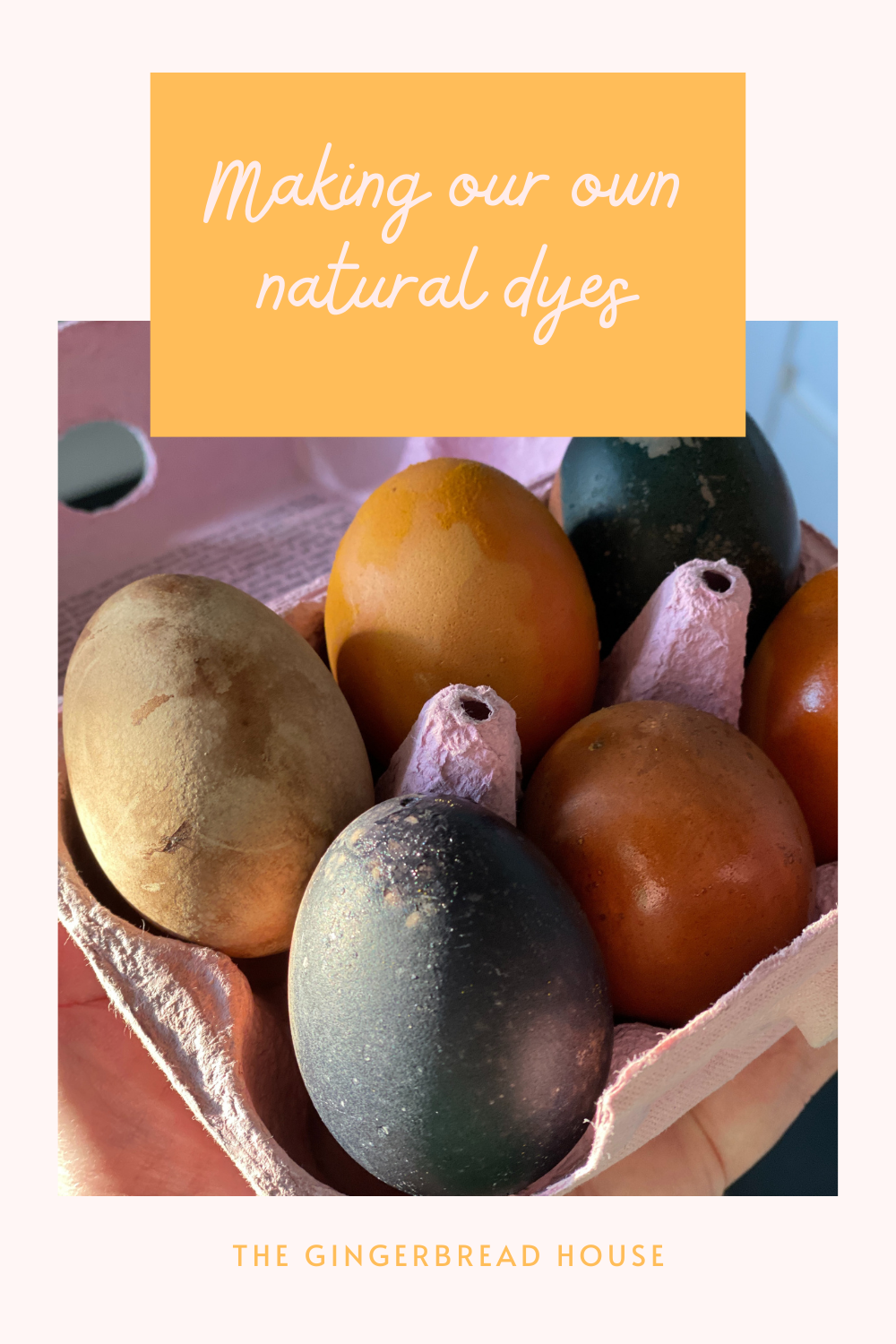 I love to experiment with dye. A few years ago I recycled a vintage blanket and used Dylon dye to make pretty bunting flags. I also updated a corduroy skirt with shop-bought black dye and my washing machine. It’s such an easy way to update an outfit.

With Easter coming up I wanted to try making our own dyes, and use them for dyeing eggs for Easter. I only wanted to use natural materials so gathered red cabbage, onion, blueberries and turmeric.

With the red cabbage I took a quarter (using the rest for dinner), removed the stalk and roughly chopped it. 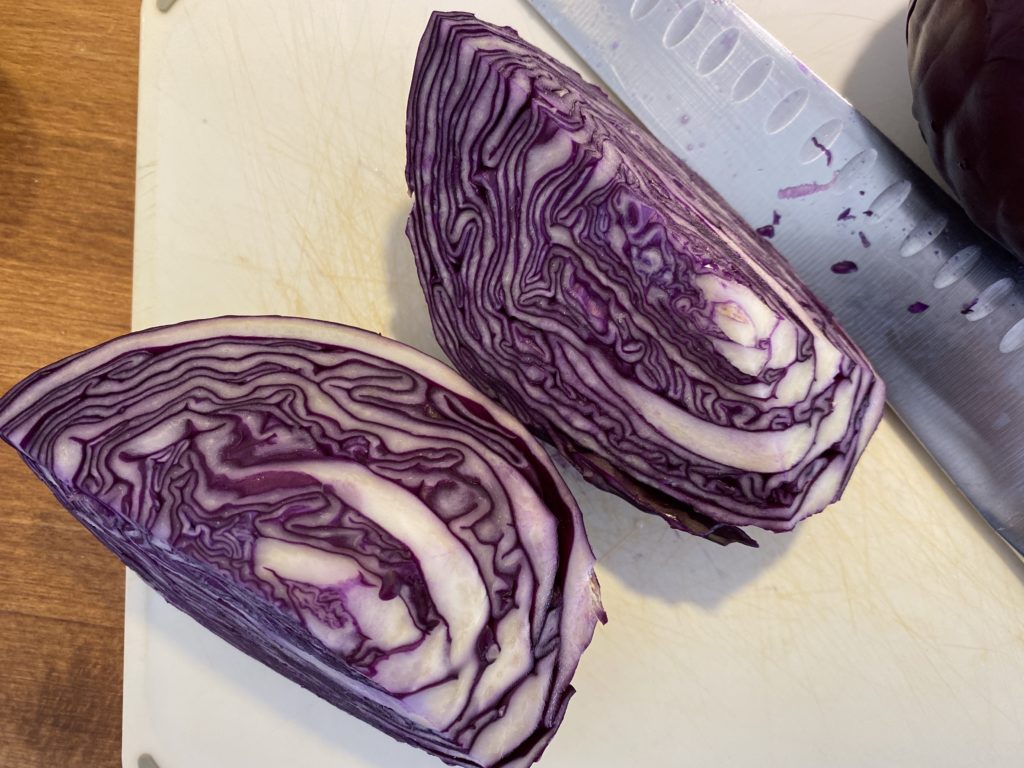 I placed it in a small saucepan and added an equal amount of water and brought it to boil. I then left the red cabbage simmering away for about 30 minutes, drained it and set aside the liquid to cool down. It made a gorgeous deep purple colour. 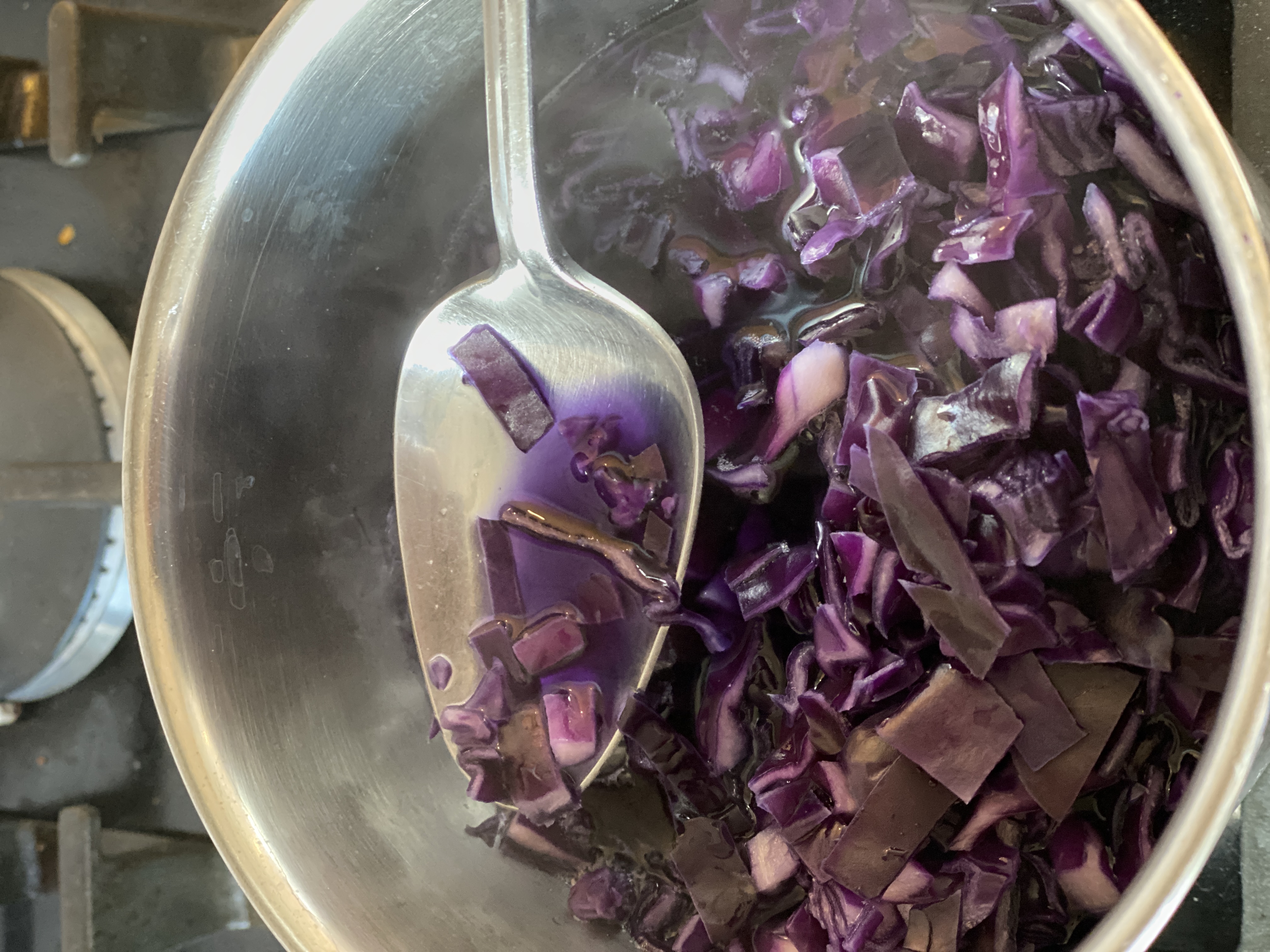 Making dye with onion and blueberries

I repeated the same steps with the onion and blueberries, using an equal amount of water to the amount of vegetables and fruit.

The onion produced a yellow colour, the blueberries a deep blue colour. I strained them both and poured them into glass jars to cool.

The turmeric was in powder form so I scooped measures of the powder into the saucepan, adding equal amounts of water, stirring constantly. This was the easiest dye to make up. 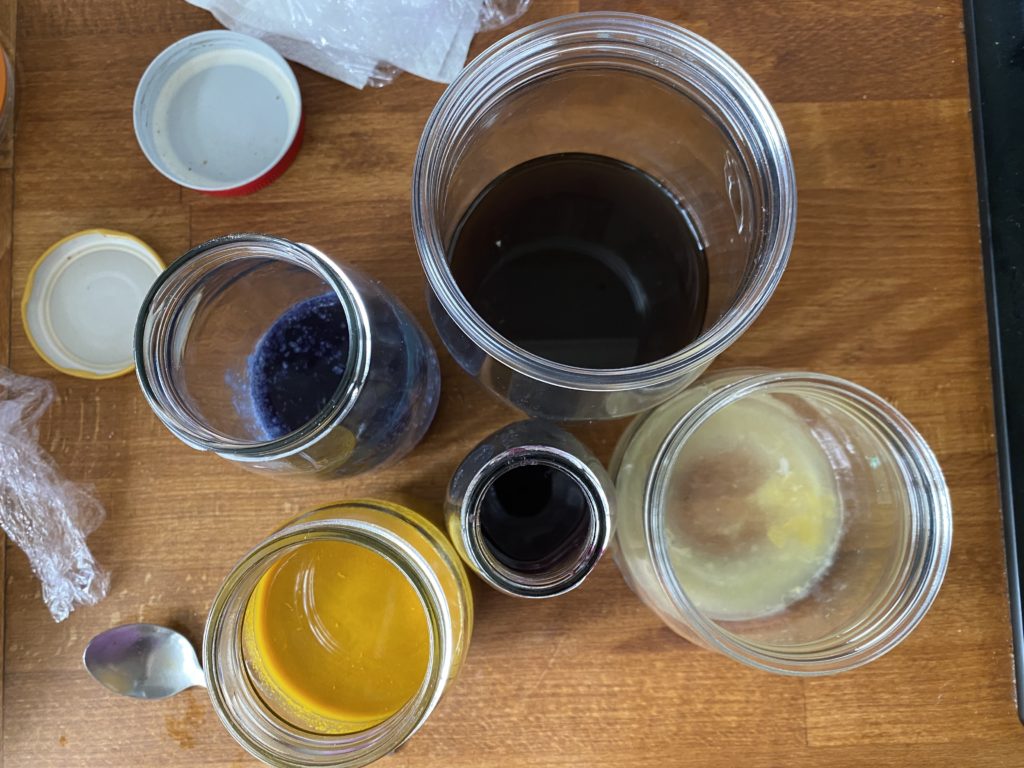 I sealed my jars and left them overnight before using them to dye eggs for Easter.

How to dye eggs naturally

First I blew the eggs to remove the insides which were kept for dinner. I did this by carefully making a hole in the top and bottom of each egg, and gently blowing the contents of the egg into a bowl. Then I carefully washed each egg and set it aside to dry. 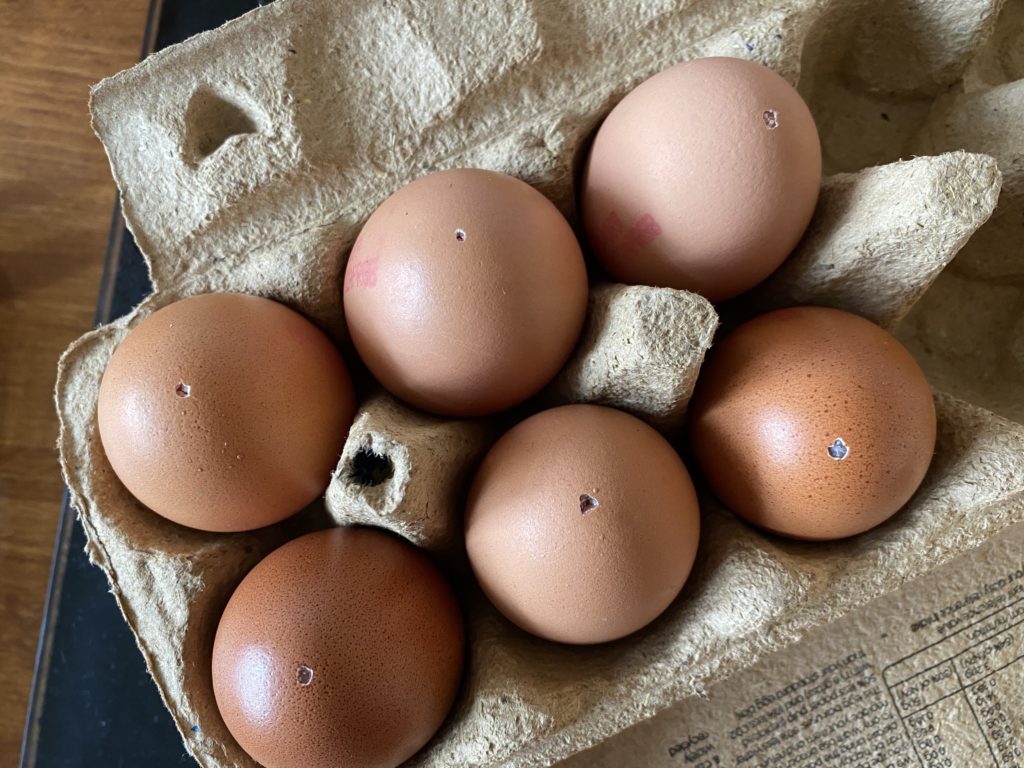 Some of the natural dyes were poured into large containers, such as the turmeric. I then poured a large measure of vinegar into the dye and stirred it before placing two of the eggs into the container. I gently stirred them before placing the lid back on. As the eggs were full of air they rose to the top of the container but they gradually filled with the dye and sank. I set it aside so the dye could take hold overnight.

I repeated this step with the red cabbage, onion and blueberries. There was less of these dyes so I poured them into smaller containers, added the vinegar and placed the eggs into them. I made sure the eggs were turned regularly so the whole egg was covered in dye.

We added one more dye which my daughter insisted on making. She wanted to try using tea leaves so we boiled the contents of 6 tea bags and she used this to dye some eggs too. She has really enjoyed some of the other egg experiments we have been trying recently and this is a fun activity that is easy for kids to get involved with.

The eggs were left overnight before being removed from their containers and gently washed to remove any residue. The results were quite subtle. 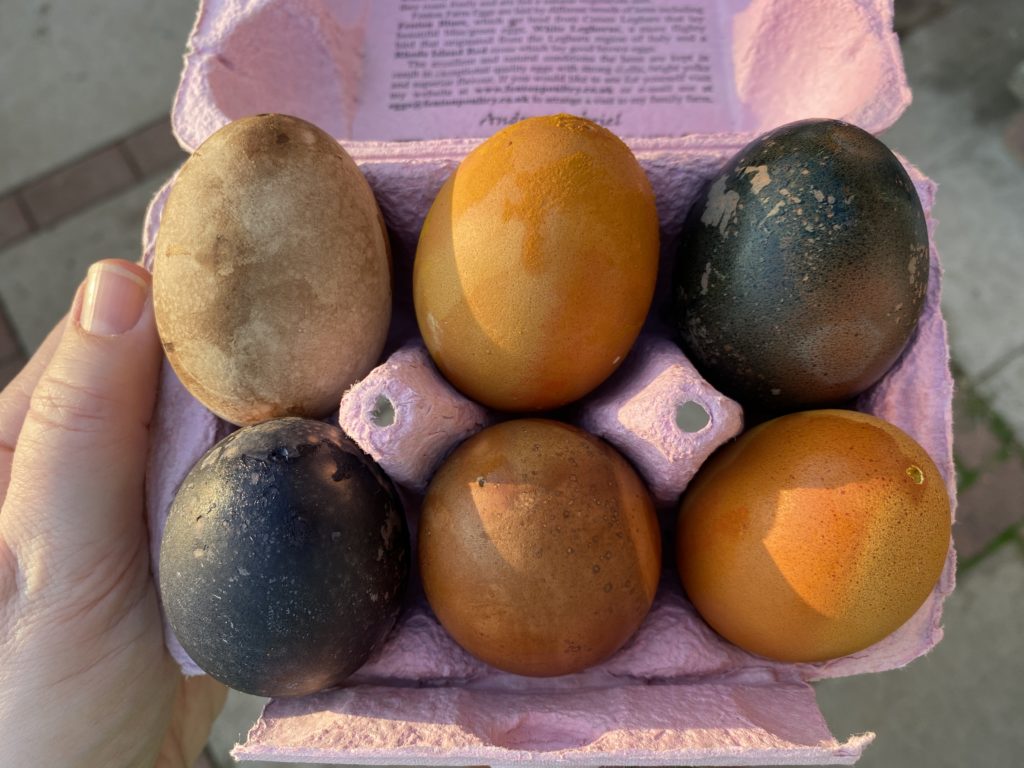 We had the best results from the tea, turmeric and red cabbage. The dye produced from the onions and blueberries quickly went off and smelled so we ended up pouring it away.

I’m so pleased we were able to make our own dyes using natural ingredients. My daughter really loved getting involved and the results were quite pretty. I’m tempted to try making my own dye again to dye some linen.

You may be interested in some of our other egg experiments:

Egg in vinegar experiment for kids