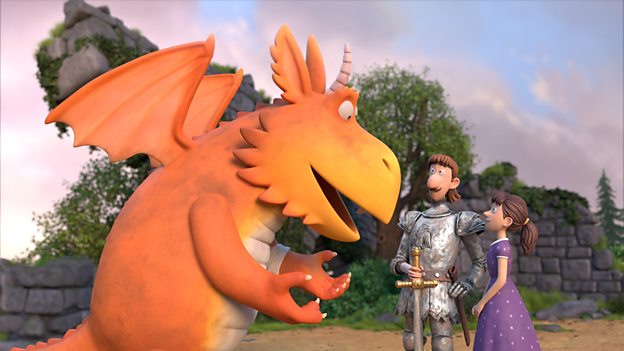 With a little over a week until Christmas we have bought the Christmas edition of the Radio Times. This is one of our Christmas traditions. Is there anyone who doesn’t love to see what they can watch with the family over the Christmas holidays?

BBC One and Magic Light Pictures recently announced that an animated adaptation of Julia Donaldson and Axel Scheffler’s Zog is set for BBC One this Christmas. This follows the success of The Highway Rat’s Christmas premiere in 2017, voiced by David Tennant and Rob Brydon amongst other stars. Previous Magic Light productions include The Gruffalo, Stick Man and Roald Dahl’s Revolting Rhymes. We have enjoyed all of them.

Zog is about a loveable young dragon finding his way in a magical, yet challenging world. Zog is the keenest dragon in school. He’s also the most accident-prone. Luckily, a mysterious little girl always comes by and patches up his bumps and bruises. But will she be able to help him with his toughest test: capturing a princess?

We love this story by Julia Donaldson, illustrated by Axel Scheffler. We love all of their books but my little girl loves dragons and this remains one of our favourites, as does the sequel Zog and the Flying Doctors. I love the fact that although it features princesses and knights it has a twist, perfect for my little tomboy. Zog was first published in 2010 by Alison Green Books (an imprint of Scholastic). It won the Galaxy National Children’s Book of the Year Award and has sold over 1.5 million copies.

Back to Christmas, and the animated half hour is being directed by Max Lang, Oscar nominated director of Room on the Broom and The Gruffalo, and by Daniel Snaddon, co-director of Stick Man, and the film is being produced by Michael Rose and Martin Pope of Magic Light Pictures. Animation services are again being provided by Triggerfish Animation in Cape Town. Voiced by Sir Lenny Henry as the Narrator, Hugh Skinner as Zog, Tracey Ullman as Madame Dragon, Patsy Ferran as Princess Pearl, and Kit Harington as Sir Gadabout. There are even rumoured to be some special vocals by Rob Brydon! Don’t forget to tune in at 4.50 pm on BBC1 on Christmas Day.

You may be interested in some of our other Julia Donaldson story book posts and crafts:

How to make a Gruffalo cave

Ladybird stones (What The Ladybird Heard)

Making our own Superworm (Superworm)