The Confession by Jessie Burton

I managed to read a good few books during the Summer holidays. I love to read and whenever the kids were occupied I pulled out my kindle to read a few pages of my latest book. I was so excited when NetGalley gave me the chance to review The Confession by Jessie Burton. I really loved her first two books, The Miniaturist and The Muse so was keen to read her third book.

The Confession by Jessie Burton 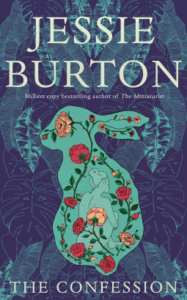 One winter’s afternoon on Hampstead Heath in 1980, Elise Morceau meets Constance Holden and quickly falls under her spell. Connie is bold and alluring, a successful writer whose novel is being turned into a major Hollywood film. Elise follows Connie to LA, a city of strange dreams and swimming pools and late-night gatherings of glamorous people.

But whilst Connie thrives on the heat and electricity of this new world where everyone is reaching for the stars and no one is telling the truth, Elise finds herself floundering. When she overhears a conversation at a party that turns everything on its head, Elise makes an impulsive decision that will change her life forever.

Three decades later, Rose Simmons is seeking answers about her mother, who disappeared when she was a baby. Having learned that the last person to see her was Constance Holden, a reclusive novelist who withdrew from public life at the peak of her fame, Rose is drawn to the door of Connie’s imposing house in search of a confession . . .

I really enjoyed this book for a number of reasons. I liked the setting of London and Los Angeles (with a few other places), I thought the characters of Rose and Connie were both relatable and believable and I enjoyed the way the book flipped between the 1980s and today. At the start of the book I felt sorry for Rose as she’s quite a sad character, but the book follows her search for her long lost mother and she really grows and changes as she discovers what happened to her mother. I almost wanted a stronger, happier ending but real-life isn’t like that, so the book ends on a positive note – even if it’s not quite what you thought would happen.

Thank you to NetGalley for providing me with a digital copy to read. The Confession by Jessie Burton (*Amazon link) is published on the 19th September by Picador.