The Women at Hitler’s Table by Rosella Postorino 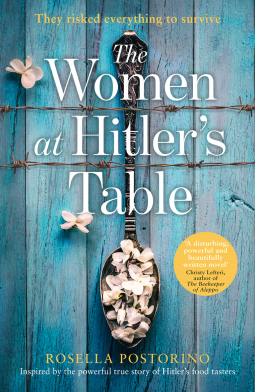 For me half term = time to read. I love working in a school, especially when I get holidays with my kids, and time to read is a definite bonus. The latest book I picked to read from NetGalley was The Women at Hitler’s Table by Rosella Postorino. I really enjoy reading historical novels and this book is set in the Second World War, inspired by the powerful true story of Margot Wölk.

The Women at Hitler’s Table

East Prussia, 1943. Hitler hides away in the Wolfsshanze – his hidden headquarters in East Prussia. The tide is turning in the war and his enemies circle ever closer.
Ten women are chosen.
Ten women to taste his food and protect him from poison.

Twenty-six-year-old Rosa Sauer has lost everything to this war. Her parents are dead. Her husband Gregor is fighting on the front line against Russia. Alone and scared, she faces the SS with nothing but the knowledge every bite might be her last.

Caught on the wrong side of history, how far is Rosa willing to go to survive?

I really enjoyed reading this book. I had read somewhere that Hitler had all his food tested before he ate anything so I found this fascinating. It was inspired by the life of Margot Wölk who died in 2014. She had kept her war work as a food taster for Hitler a secret until a few years before she died. The author tried to interview her but sadly she died before she could.

The author, Rosella Postorino, has written a beautiful and haunting novel featuring Rosa Sauer. I felt sorry for her and enjoyed following her journey as she came to terms with her new life in Gross Partsch. Picked by the Mayor, every day she is taken to barracks where she and the other tasters are forced to eat meals cooked for Hitler. People want to kill Hitler by any means possible, not even his food is safe. If the food is fine, the women survive and can go back to their families. There is always a chance that the food has been poisoned and they will not survive the meal.

Over the next few years Rosa is faced with her husband going missing, a friends’ unwanted pregnancy, the unwelcome attentions of an SS Officer, and an assassination attempt on Hitler involving her friends’ husband. I’m not sure she always made the right decisions but I can’t imagine being a German living at this time, especially in such close proximity to Hitler.

The first two parts of the book are quite slow paced. The third part details Rosa’s escape back to Berlin and what happened to her next.  Like Margot Wölk, Rosa escaped the Soviet destruction of the Wolfsshanze and surrounding areas, which left all the real food tasters dead. Her life continued in Berlin, forever shaped by her experiences as a food taster for Hitler.

Thank you to NetGalley for giving me a copy of this book.