How to make a Peppa Pig nose

As a mum of two pre-schoolers it’s fair to say we watch a lot of Peppa Pig. My children adore Peppa and Little Sis has all the Peppa Pig playsets, clothes, cutlery and story books she can get her hands on. Nick Jr. is one of their favourite channels and Little Sis gets quite upset when the adverts get in the way of watching her beloved episodes of Peppa!

Luckily for her Nick Jr. is gearing up for a month of Peppa Pig celebrations. This July will mark 10 years since the nation’s favourite pig was first broadcast on Nick Jr. and to celebrate it is giving fans the chance to join in the fun with the Nick Jr. Peppa Pig’s Oinkestra.

As of this week, fans can upload videos of their own oinks online to join the Nick Jr. Peppa Pig’s Oinkestra at nickjr.co.uk or through the Nick Jr. UK Facebook page to receive a Peppa Pig activity pack. Little oinkers may even see themselves on the channel, oinking along to the much-loved Peppa Pig theme song.

The celebrations will end with the ultimate Oink-a-thon, where fans can tune in to watch the Top 20 Peppa Pig episodes, as voted by fans, on Nick Jr. over the 5-6th July from 10:30am-5:00pm.

How to make a Peppa Pig nose

We wanted to get in the mood so we made some really fun Peppa Pig noses! They were really easy to make as we used an egg carton. I separated each dimple which the children painted with pink paint. 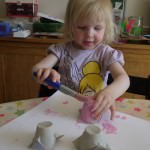 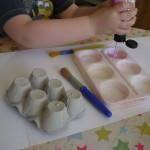 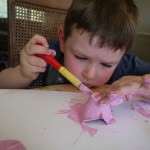 After they had dried we added darker pink paint for the top of the nose and nostrils. I made two small holes on either side of the nose and threaded them with elastic. That was it! 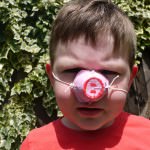 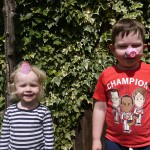 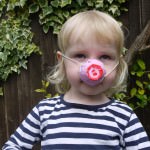 As well as the craft supplies we were also sent a selection of Peppa Pig musical instruments so the children have been busy practising and putting on shows of their prowess. They will be all ready to record themselves for the Nick Jr. Peppa Pig’s Oinkestra – don’t forget you can join in too!

To get you all in the mood for the Peppa Pig celebrations I have three goody bags to share with you stuffed full of goodies from Nick Jr. The prize includes crayons, colouring book, poster, cuddly toy and keyring To enter my giveaway all you need to do is complete the Rafflecopter widget below. The giveaway is open to UK residents only and the prizes will be fulfilled and sent by the PR agency direct to the winners.