Looking for the Battle of Britain House, Ruislip 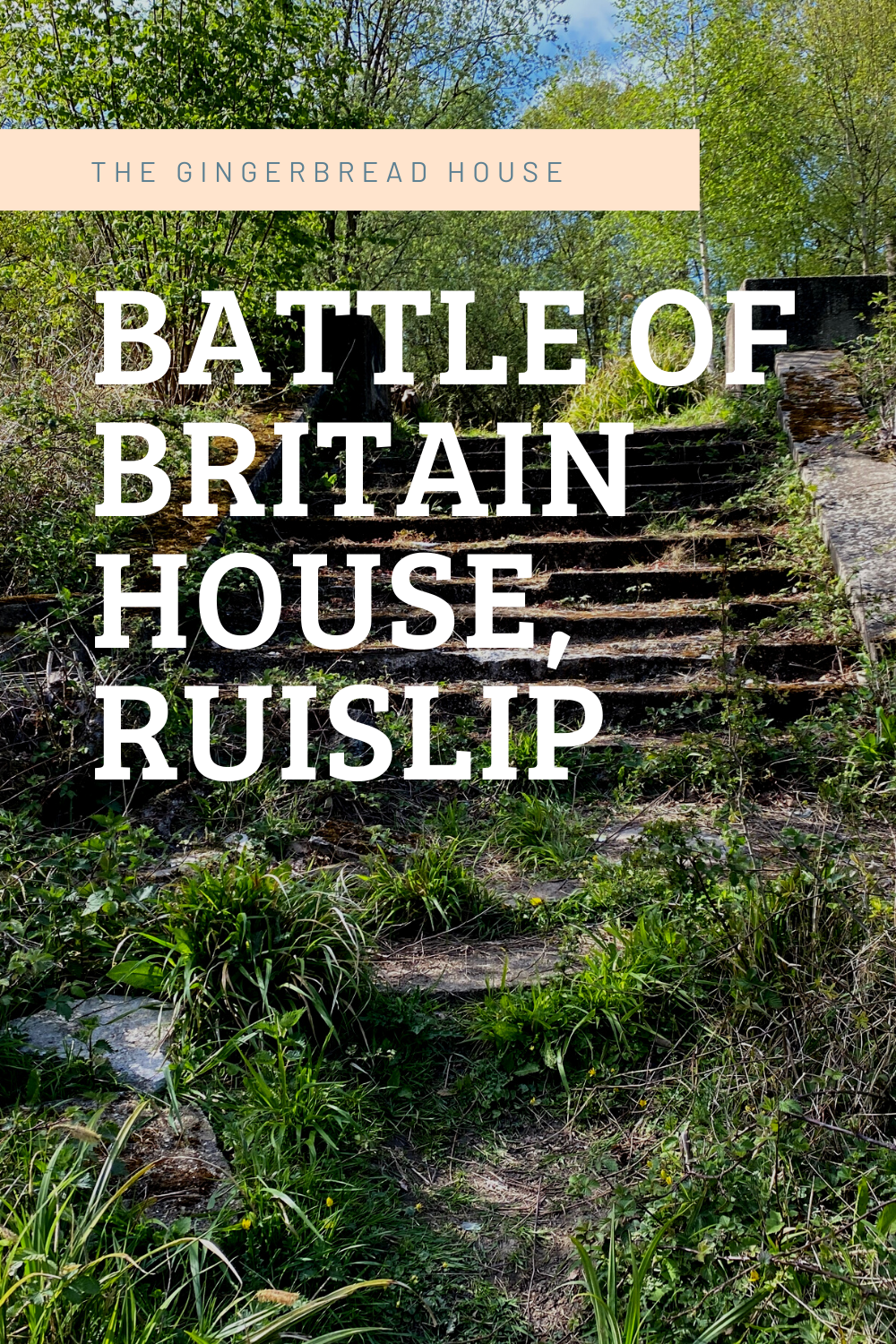 We’ve lived in Ruislip for a good few years now and were intrigued when we heard about the ruins of a house in the heart of Ruislip Woods, where agents of the Clandestine Operations Division were trained for secret operations in occupied France! Doesn’t that sound like an amazing story!? We’ve wanted to look for the ruins for years and finally found the time.

I wrote a little about Ruislip Woods a few weeks ago. There are numerous paths through the different woods and we’ve had fun exploring them over the weeks. This is my favourite time of year and it’s lovely seeing the woods bursting into life.

The Battle of Britain House, Ruislip

We knew roughly where the Battle of Britain House was and on a recent puppy walk we tried to find it, but failed. As it is only a ruin there are no sign posts, and we haven’t met anyone who knew where it was. My husband and daughter frequently cycle round the woods and finally found it, so we all went for a walk together.

There are numerous blog posts about the Battle of Britain House. A house was built in Duck’s Hill Plantation around 1905, and owned and improved by various people up until the outbreak of the Second World War. At that time the house came into the hands of the Ministry of Works and was leased to the Office of Strategic Services. They used the Battle of Britain House (then known as Franklin House) as a location for the OSS to train before heading off to enemy territory.

After the War ended the House became some kind of local college before sadly destroyed by fire in August 1984. It was decided to remove any remains of the building and let the woods reclaim the site.

So what can you expect to see if you visit the Battle of Britain House site in Ruislip Woods? We walked through the car park on the North side of Ruislip Lido, following a small path through some open scrub land to the edge of the woods. There are some paths through the woods but we went on a bit of a circuitous route until we found ourselves coming round the site of the house. The formal front garden was really overgrown and quite difficult to walk over (we had to pick the pup up!). 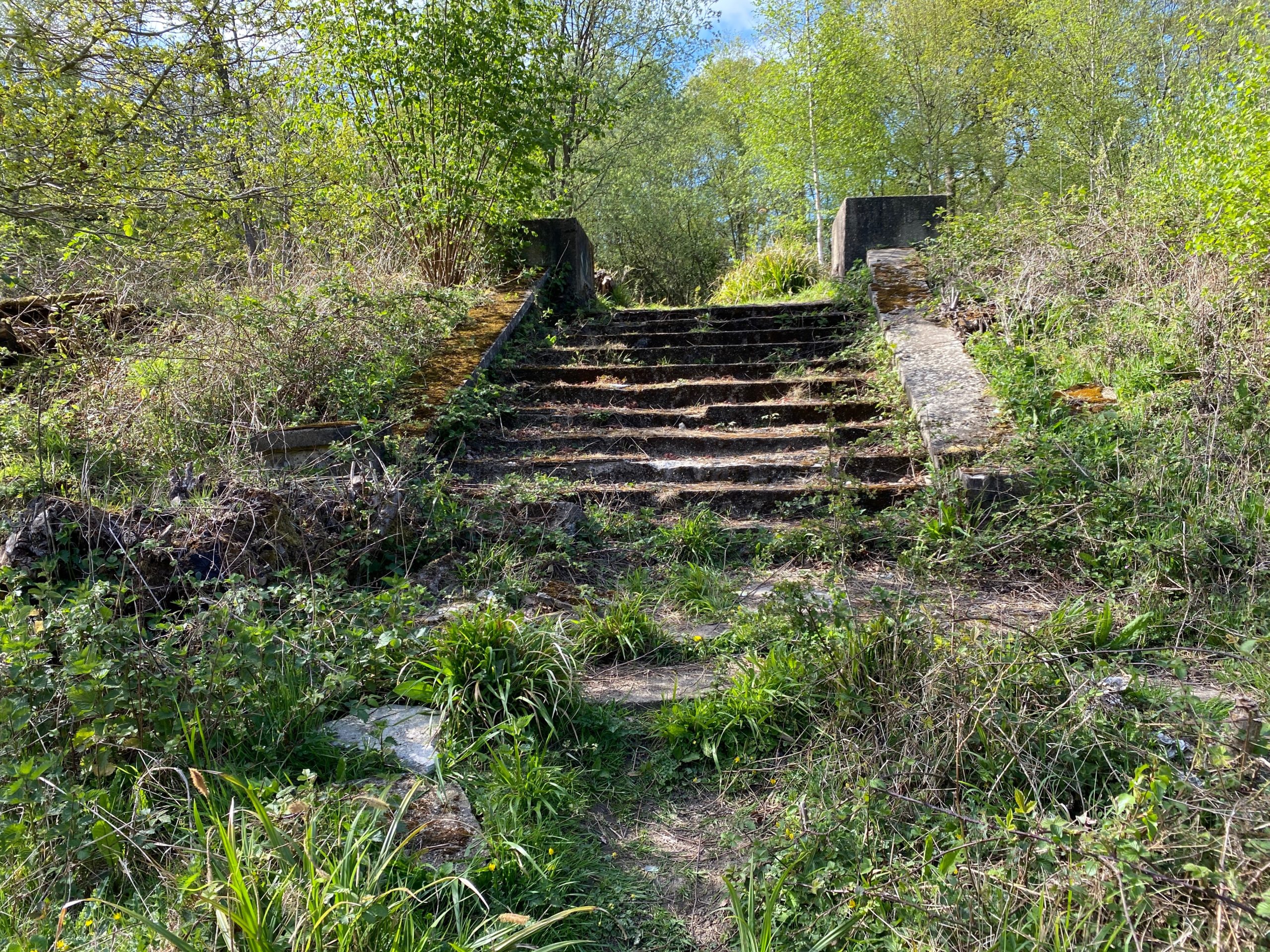 The house was built on a platform overlooking the garden with steps linking the two sites. The steps were practically the only thing to survive, although sadly the famous oriental lions were long gone. There was some interesting graffiti on one of the pillars at the top of the steps. 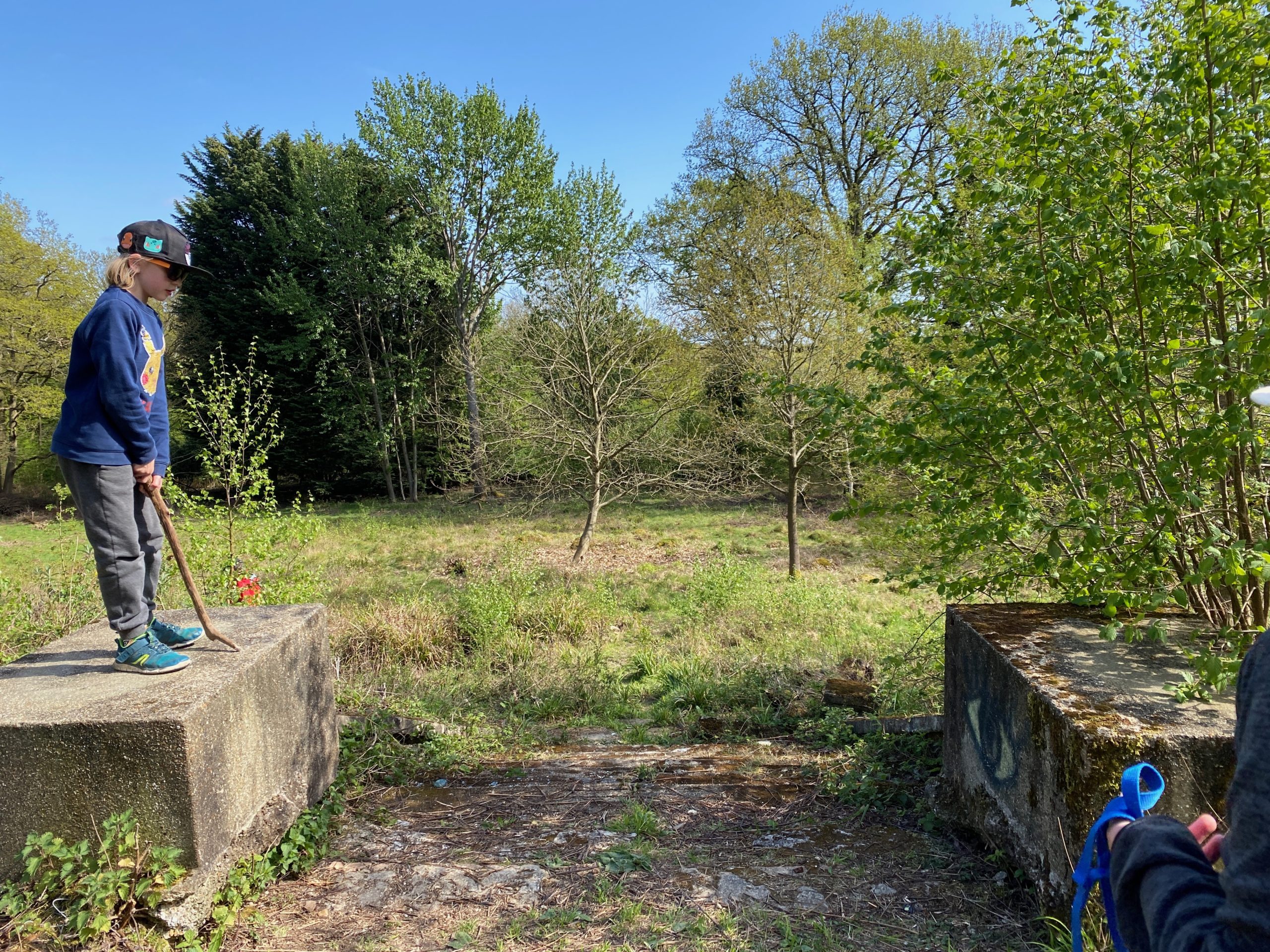 We explored the site of the house and you could make out concrete foundations, drain covers and a few other things. There is still some rubble lying all over the site. 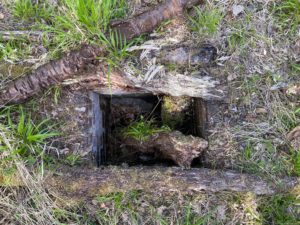 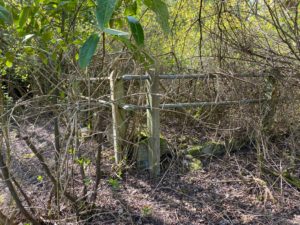 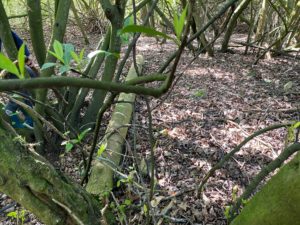 After exploring the site we walked back down through the garden. I quite liked the way nature was reclaiming the site. It felt very hidden from other people walking through the woods, you could hear them but perhaps they weren’t aware of the site of the house just the other side of the trees. At the bottom of the garden we found a few more concrete structures hidden away.

There were the remains of three circular shapes in a raised area at the end of the garden. The area was overgrown but perhaps once upon a time there were fishponds or something there. 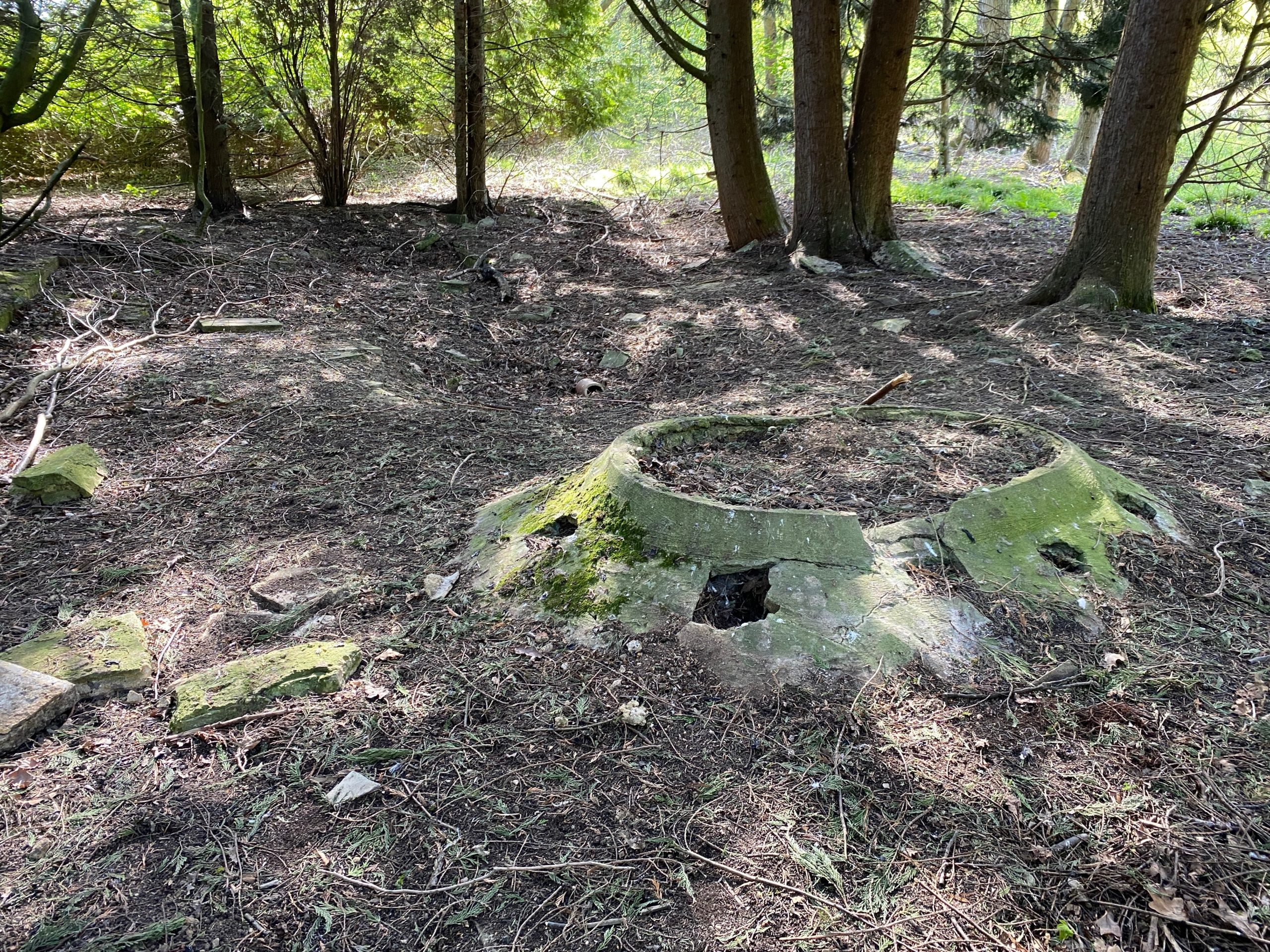 We spent about half an hour exploring and then walked back home. It was fun to finally have found the site and understood a little more about the history of Ruislip.

The house was originally accessed from Ducks Hill Road, we found the original entrance on a walk another today. Now all that remains is a gate in the fence with a small brick building to the right of the gate. 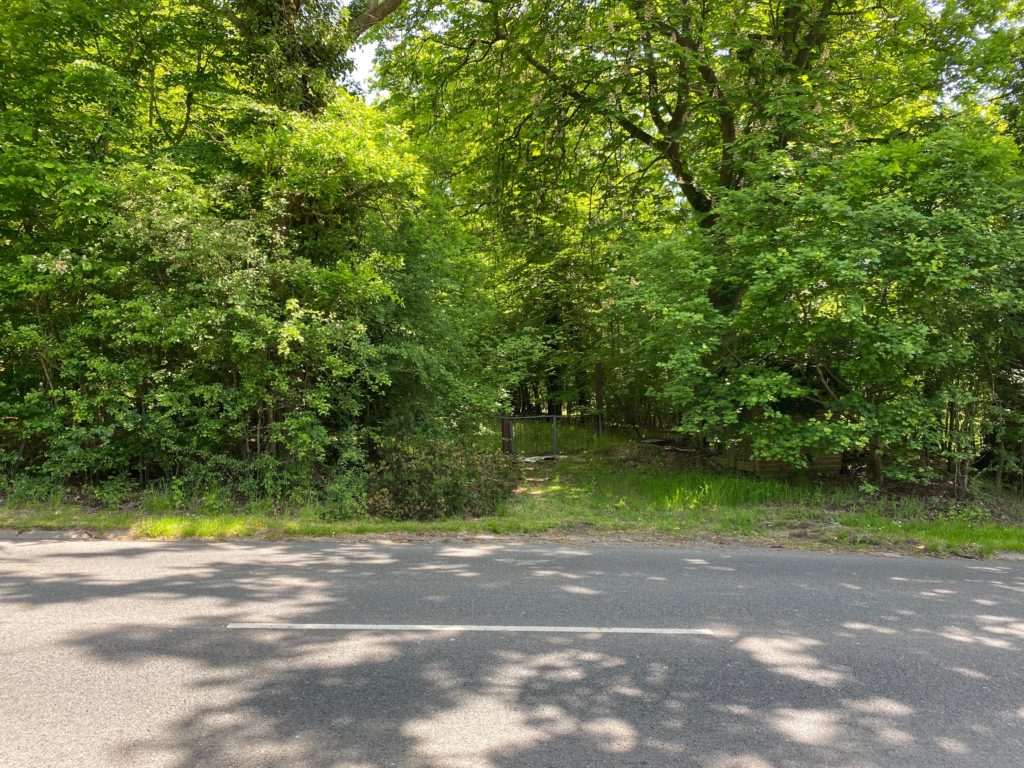 It’s lovely to have the opportunity to explore the area a little more.

You may be interested in our other posts about things to do in Ruislip: